Another relentlessly sunny day in Oxford!  The students are getting the entirely wrong idea of the weather here.  I long for rain.

Today we discussed a provocative chapter centering around Alice in Wonderland and the creator, Charles Dodgson.  The author clearly loathes him and underscores his seemingly unnatural desire for young girls… to photograph naked.  This took us to the west side Oxford to Ports Meadow, up to Godstow with its medieval miracle legends and down through Jericho and the OUP. Our discussion themes were on rowing and competition among the colleges but the big theme was that of art and morality.  Should we engage with art–music, paintings, literature–written by people who are immoral and live unethical lives?  We were deeply divided on this one.  On one side it was argued that what art would be left?  Does not the art work take on a life of its own and survive on its own merit, or not?  But the other side highlighted that in attending to such art we are honoring or at the very least accepting the artist him or her self.  And for artists who are alive, we are giving them money and glory–even as they do awful things.  Chris Brown featured in our discussion.  This led to a much larger exploration of where morality comes from.  Alas, we ran out of time and I cannot offer a definitive response.  But spoiler alert:  trust neither one’s own self nor one’s society to always be right.

Gate to All Souls’ College

Later in the afternoon we had an official walking tour of central Oxford with Lucy, a knowledgable guide who offered delightful tidbits of information about how landmarks inspired writers like C.S. Lewis but also how these very landmarks now mirror back the great writers in grotesques added to the Bodleian or busts in Exeter Chapel.

Did this faun inspire Narnia? 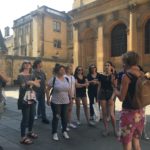 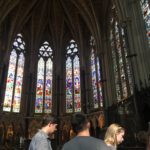 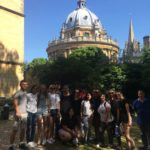